Do we need to change the way we do things? 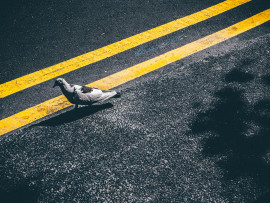 Albert Einstein is credited with saying that the definition of insanity is doing the same thing over and over again and expecting different results. We’d probably all agree with Albert, you’d be foolish not to, but do we sometimes fall into the trap of doing things again and again because, well, that’s the way we’ve always done them?

Many years ago I met a man who served in the RAF during World War Two, he told me a story I’ve never forgotten. On his first day on the job he was sent out with a paint brush and a tin of bright yellow paint and told to refresh the runway markings. All was going fine until he inadvertently knocked over the tin of paint. Looking down at the bright yellow blob he knew he’d be in trouble if he did not do something and do it quick before his mishap was noticed. Quick as a flash he decided to make the blob into a square, a bright yellow square, before swiftly moving on.

Thirty years later the veteran and his peers were invited back for a re-union. After lunch a few of the veterans decided to take a stroll down the runway and guess what?  Yes, there, freshly painted, was the man’s yellow box. A completely useless bright yellow box had been carefully maintained for thirty years!

Sometimes it is worthwhile taking a step back and asking –

Do you have any yellow boxes?